Once a month we are going to start posting Dev blogs that go over some of the most asked questions on the forums, as well as some questions we are asked in-game while meeting with the community. The blogs will be in addition to our regular responses on the forums, but will allow us to reach a larger part of the community while also keeping all the answers in one place.

(These questions are in no specific order.)

Yes, the original 7 were added as the start to the tree. We have been watching the forums, and especially this thread, for ideas on what the players are interested in. One thing to note: as Mathieu said in the above thread, we don't want these perks to be combat related. We will continue to take player input on what they would like to see added to the tree, and go from there implementing 1-2 new trees to start.

What sort of things will be added to the tavern? NPCs? More decorations? Making it less bright?

We have adjusted the lighting already based on some feedback. As far as what will go in the tavern, we talked already about the instanced room that we plan on adding so that a party could have a private meeting place, fellowships, etc. We are also planning on adding some sort of mini game to the tavern, but this will likely be farther down the road. The main draw that we see the tavern providing is a common hangout place for players, along with improved ability for Quest players to be able to see more players in their "complete" (no LOD) form to interact better with the community as a whole, but it is always nice to have something to do while hanging out. One thing that will be coming to the tavern sooner than the mini game is the interactable bottles/cups/etc. like there was in the old tavern, as we know this was a source of entertainment for many players.

Fellowship Hall: what purpose will it serve?

Inside the Fellowship Hall there is currently a shared chest that only players in the fellowship can access to deposit and withdraw resources. With the Mini Story Pack patch we will also be adding an update to the Fellowship hall that adds in an additional training room. Inside this room you will find the same practice dummies that are currently in the tavern (lvl 10/20/30 dummies), along with a "boss sized" dummy to practice on. The boss sized dummy currently is the Minotaur boss, but he won't perform the actions you're used to seeing in the dungeon. He is essentially just a larger-than-average dummy that will allow you to practice your different skills on something appropriate sized (something that has been requested from the player base), along with an average sized boss room. Here is a screenshot of the area from the fellowship hall. 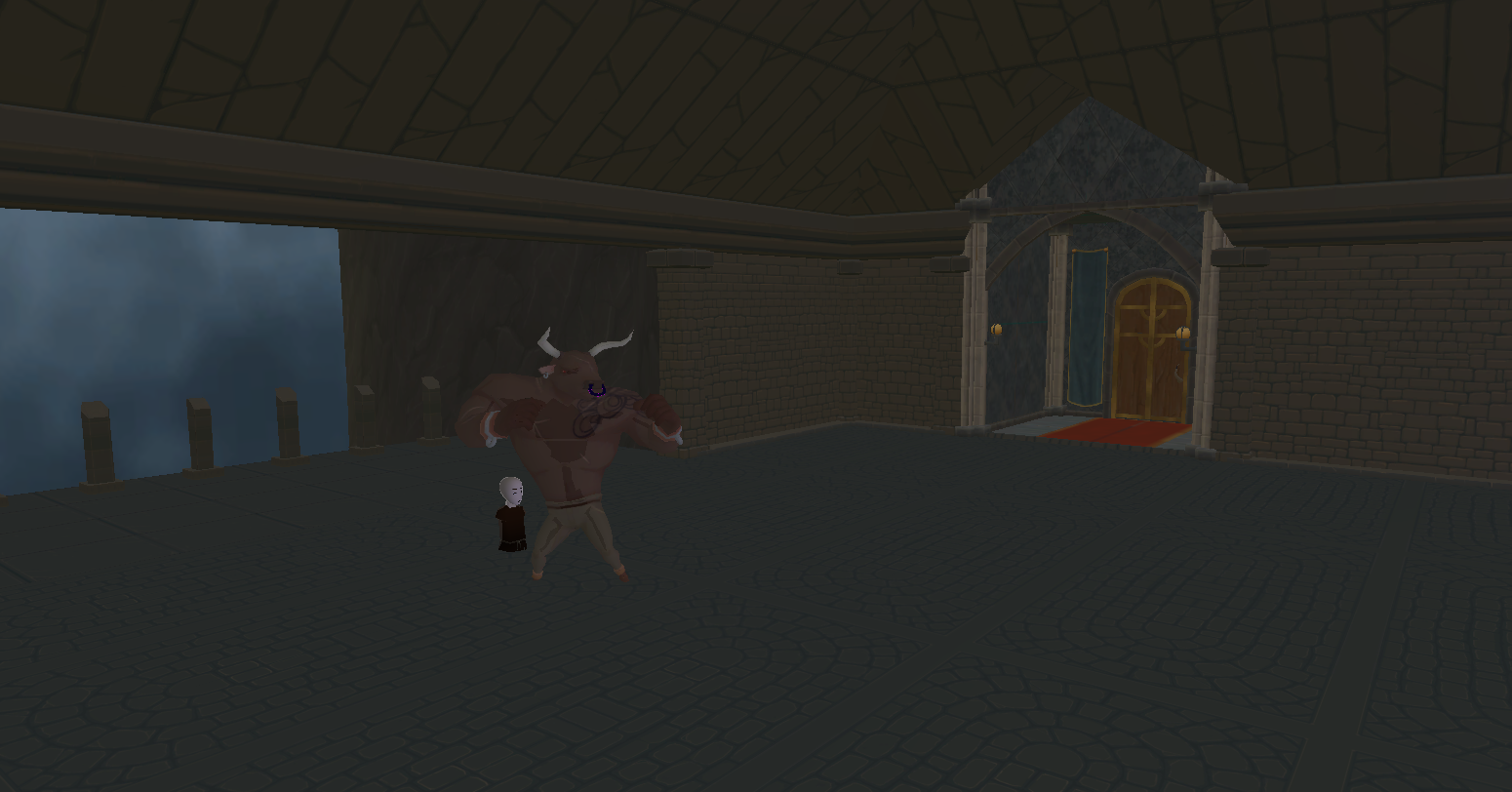 How can you fix the surplus of dram?

Working on the economy is something that is and has been at the front of my mind for a while. While I don't think there is any one one thing that we can do to turn the economy around to make players want to spend the dram they currently have, or to make players that currently have no reason to go farm materials/monsters for dram to do this activity, we are looking at the problem and coming up with solutions internally, and will start communicating these ideas with the community to start this process in the coming months.

Are you fixing any of the bugs in game?

Yes, we are actively fixing bugs in the game. We are automatically capturing crash logs from players, as well as using the player-generated in-game reports to track down and fix some of the prevalent bugs. We released our first bug fixes after starting to capture crash logs here, and will have another patch going out on Tuesday, April 14 with more fixes. We will continue to fix these bugs/desync problems and appreciate everyone reporting them to us.

Also as a side note, if you are playing on Quest and are getting kicked to the login screen on a regular basis, you might try the tips here, as we discovered that at least some of these are from the Quest itself trying to switch wi-fi bands, which frequently causes a disconnect.

Do you have any plans for Tinkering to be more useful?

Yes. While I think the Tinkering class is already useful in the fact that it's a new crafting system to the game and players can create and decorate furniture in their house with the items they make, I think this question was more about wanting to make more usable items that can be put to work in the gameworld. So the simple answer is yes. We do have some new Tinkerer items in the works that are more than furniture pieces and will tie into the above question about the economy and dram, but it's still being kicked around internally on exactly how we want to do this, so look for more information/discussions on this in the coming months.

Can you make the capes break down into a shards?

We have always thought of the capes as an achievement slot. There is no way to buy a cape without actually accomplishing that achievement (like killing a World Boss, getting the grinder tool cape, finishing the MSQ in game, etc.) and as such we drop capes off of these activities at a higher rate then we do other items, sometimes up to a 100% drop rate, to ensure that players that want that cape to show off their achievement can get it their first time without having to farm over and over. This would prove to be a problem if they were able to be broken down into shards, which can then be sold/traded, as we would need to restrict their drop rates then.

Will the lantern be fixed so it lights up better in caves and the mines/halls dungeons? Can you make it so it always shines even when you're fighting?

For the Mines/Halls dungeon specifically I have increased the lighting to compensate for the lantern not working currently with classes once in combat and this will be coming out with the MSP patch.

For the lantern, yes, we will be re-working the way it currently works so even if a player has their weapons drawn and fighting it will still emit the light and will increase the lighting. While working on the MSP, we have also added a way to change the ambient lighting in specific parts of a zone, and will be applying this to the overworld caves (so for instance inside of Sarrow's Cave outside of Highsteppe), but this will not be near as dark as the dungeon was. I always thought it felt strange to enter a cave in game but not feel as though I had walked into anything different from the overworld, so this change (while still not as dark as an actual cave) gives you more of a sense of ambiance and entering a new area. I've attached a short gif below just to give an idea of what it will look like, and the darkness of the cave.

Will we be able to buy more character slots any time soon?

Yes, I don't have the specifics on how it will work yet, but this is something that I know the community has been asking for and we will schedule time to implement.

This is another QOL improvement that I know players have been asking for: the ability to sort their friends list by online first so they can see who is currently playing. This is something that we will be improving on in the coming months after the MSP is out the door.

What’s the thing you’re most excited about that will be added to the game?

I think that I have two things I'm really excited about (well more then that, but I'll limit it to 2). The first is the boss fight coming out in the Mini Story Pack. I think that the art team did a really great job on the level design and the overall feeling of the level. This, along with the fight itself, and especially one part of the fight: the first time I had play-tested it with the team, I got the same giddy feeling I can remember from way back the first time I used the Fire arrow during our original testing and seeing the Rain of Fire come down. So I really hope, and think, that the community will enjoy the questing dungeon overall and the boss fight, even if it's different from what we are used to in the game currently.

The second thing I'm really excited about is bringing some of the new MSP mechanics into the overworld, like the Treasure Hunt. I think this is a great system that has been fun to play test, and will lend itself really well to adding new places to explore to the current zones that maybe players haven't ventured to yet. The exploration, along with this being a consumable that has an expiration time to it, makes me also hope that this will be a hotly traded item between friends, fellowships, and the Auction House.

One more thing I'm excited for (so 3 things I guess) is the upcoming Raid we're going to be releasing to the game (in the future after the MSP). While we haven't talked about about it much yet, the terrain and level are really great, along with I think a good feeling of completion when killing one of the bosses. (If you have been playing through the MSQ and also the Lore missions from the Reputation NPCs, I think you will have a good idea of who I'm referring to.)

Our first Mini Story Pack will launch Q2 2020. In our fourth spotlight, we’re introducing the monsters you…