There's an awful lot of numbers in that title, but basically what we're doing is just previewing for you some of the new things that will be coming in the second Closed Beta test, which begins September 15th. Since there's so much time between the last beta test and the next one, we'll be doing a few blog posts each highlighting different features. Without further ado, let's dive into some of the great new stuff we've been working on since the last test. 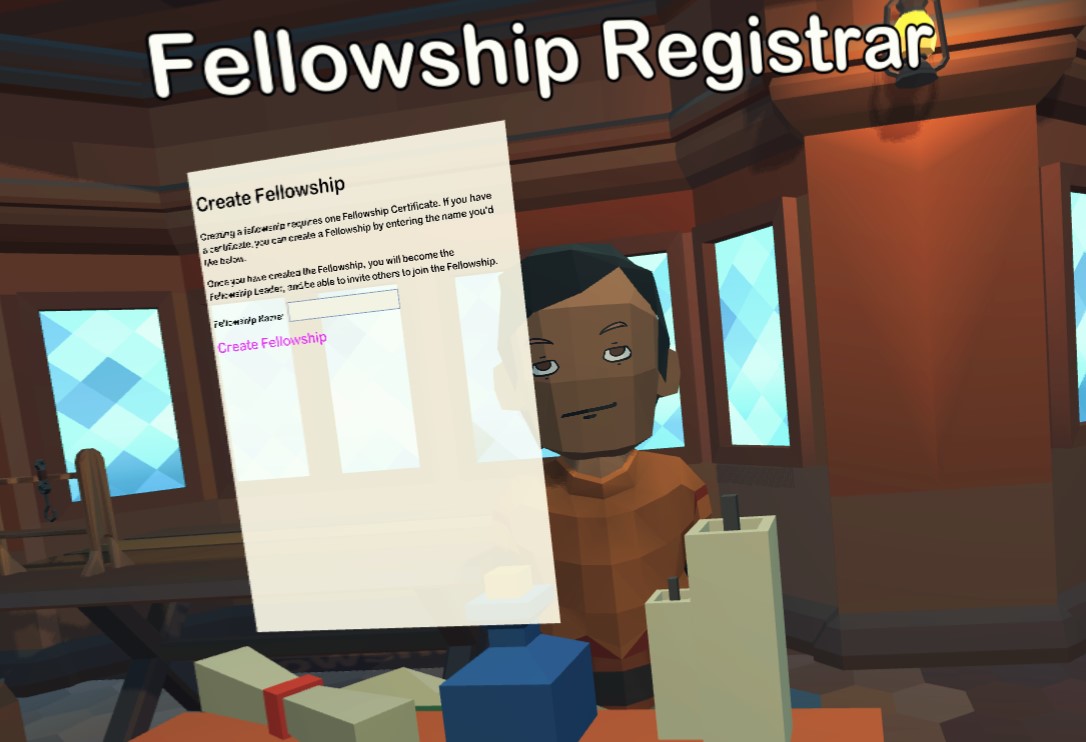 Note that the Registrar is not actually located in your Player House, that's just where we were testing it

One of the most-anticipated features of the community has been Fellowships. We've been a bit mum on exactly what would be going on here, mostly because we wanted to wait and see how the community developed overall before we decided how to provide the tools to help it get organized.

Every player in OrbusVR can join a single Fellowship. We want your Fellowship to be part of your character's identity, the same way that their name and surname are. You should wear your Fellowship's name proudly as you're out on your adventures, and we anticipate that your Fellowship will be one of the biggest pieces of socialization for you in the game world.

Creating a Fellowship requires a Fellowship Certificate, which is something that some players will have right at launch (depending on what level you bought in at). If you don't get one at launch, fear not as they can be purchased from the Fellowship Registrar. The Registrar is located in Guild City and is the person you'll speak with to create, and upgrade, your Fellowship.

At founding, your Fellowship is Level 1 and can have up to 10 members. We're placing a cap on this because we want Fellowships to grow organically, not just be a zerg rush to see who can sign up the most players as quickly as possible. That said, upgrading your Fellowship to allow more members to join shouldn't be too terribly difficult for active players, and we'll keep an eye on these numbers as the game approaches launch. A maximum-level Fellowship will only hold 30 members, so that's something to keep in mind as you plan out your future adventuring parties.

As part of a Fellowship, you can send in-game messages to other Fellowship members from anywhere in the world. Your Player Compass can also broadcast voice messages to your Fellowship (just shake it to switch between "Party" and "Fellowship" voice broadcast). So you essentially have a voice chat channel with your whole fellowship going all the time.

The Fellowship Hall is a special, instanced location, that's like a Player House for your entire group. Only those in your Fellowship can access it. Inside you'll find plenty of space to socialize and chat. We have some big long-term plans for this space, including the ability to acquire trophies of your group's conquests, post messages for all Fellowship members to see, and more.

This is really just the beginning of the Fellowship system, and we have a long-term plan to really keep adding features here that we think is going to end up making Fellowships a key part of the game world. So start planning now! 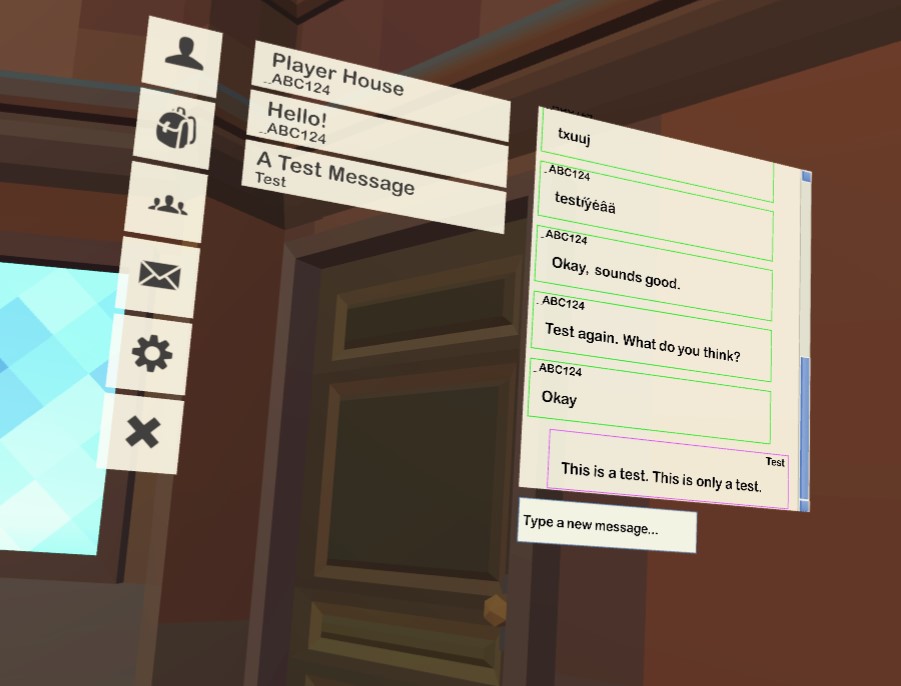 Another major new feature in the new test will be the in-game messaging system, which allows you to send private messages to players in your Fellowship on your Friends list. We went back-and-forth about whether or not we wanted the messaging system to be something strongly tied to the in-game mechanics (e.g. making you go to a mailbox to send a receive messages, etc.), but in the end we decided that since there are no global chat channels in OrbusVR, the in-game messaging should be something that you can do from anywhere; otherwise, our prediction was simply that players would constantly be opening up external applications to message back-and-forth, which isn't ideal, as we'd like to keep that communication in-game if possible.

The messaging system is designed such that once you start a conversation with someone, you can just message back and forth fairly quickly -- it's about as fast and convenient as using an SMS system is in real-life. It's great for messaging someone to ask them if they have something you need, to see if they want to go on a dungeon run with you, or just to find out what they're up to.

Messages that are sent while someone is online are delivered right away and they'll receive a notice to let them know about it. If they're offline, they'll be able to read the message they next time they get into the game.

We'll keep fleshing this out as well, but the basics are in and we're excited to see how it gets used in the next test! 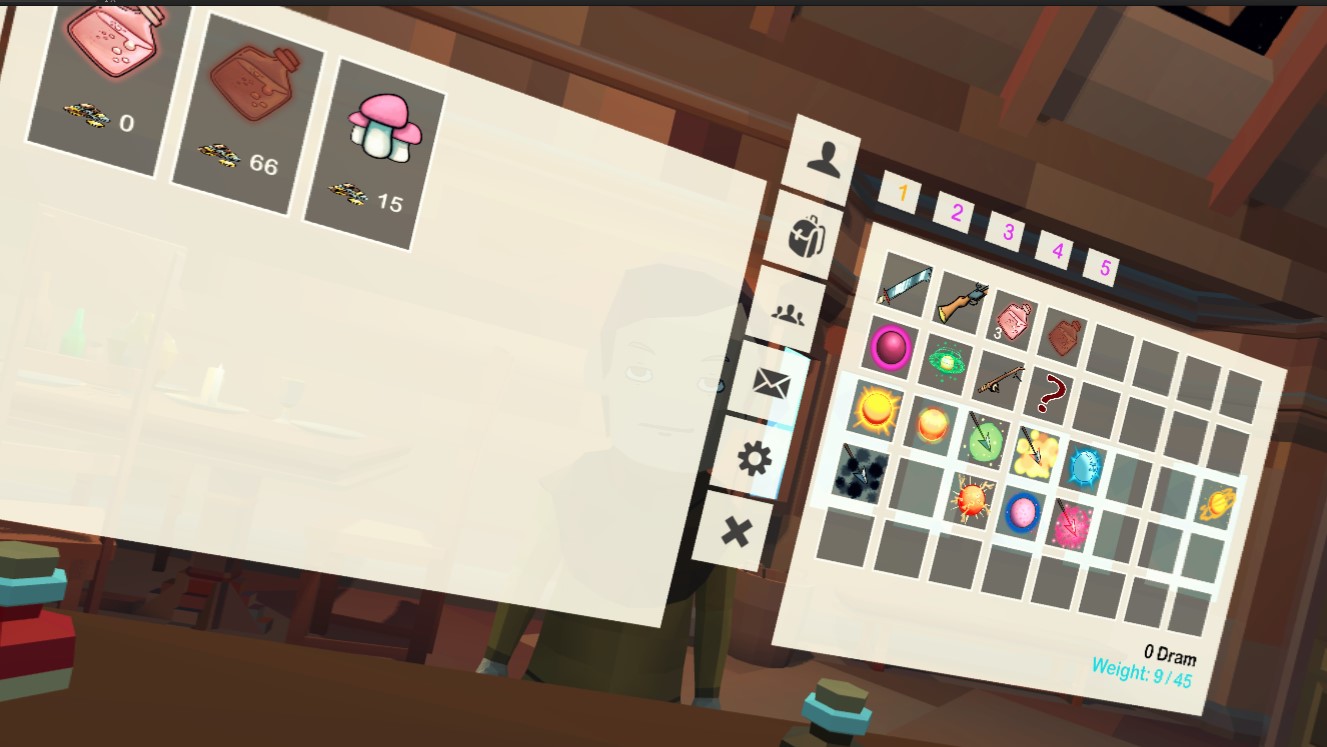 Something that we've been wanting to do from the very earliest days of OrbusVR is offer a way for Merchants to really dive into the game world and fulfill their fantasy of owning a small shop that offered wares for sale to other players. We're pleased to include the first prototype of this system in the next test!

Scattered throughout the various cities and villages of the world you will now find Market Stalls. Once a player claims a stall, they are able to place items into the stall to sell, and set the prices for those items. An NPC will remain at the stall to sell them even if the player is not around. Players can add additional inventory to the stall simply by adding onto the stacks of the existing items, and they can check stock and change prices using a simple interface.

Although we eventually intend to move to an automatic system whereby players can bid against each other for the right to own a stall in a certain location, to begin we are simply going to handle this manually. So we'll be contacting our Merchant-tier supporters to give them a stall for the next Beta test, and then as we approach launch they'll be able to choose where they want to start in the world. If you are a non-Merchant tier backer and want to acquire a stall, you can raise enough in-game Dram to purchase one -- more on that in the future.

Again, this is just the prototype of this system, and in the future we'll be offering the ability to customize your stall, the NPC offering your wares, different sizes of stalls, etc.

This is really just the beginning of everything that's coming for the next test. Other things we've already implemented you can look forward to:

...plus of course all the things that we'll be working on in the next couple of weeks and highlighting in the next blog series, such as new itemization, combat balance, the new Desert Dungeon, and more! See you then!

The second Closed Beta begins in just a few short days! The whole team is working like crazy to…

Hey everyone! Sorry for the delay in posting this. Literally as soon as the Closed Beta ended, my basement…